Meet Nicholas Muhanji, a ten-year-old boy from the mainstream school – St. Charles Lwanga Primary School where Mary Rice Centre is hosted. Nicholas had a Tran’s femoral amputation due to cancer when he was seven years old. Luckily enough the stump healed well and he was trained to walk using crutches. 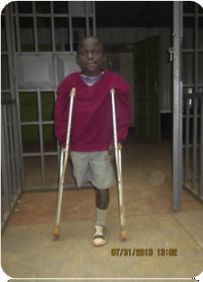 Nicholas faced numerous challenges physically, psychologically and socially. For instance walking from home to school was difficult and tiring because of the poor pathways along the Kibera slums not forgetting the distance. On the other hand his self-esteem was also affected because he felt bad not being able to walk with his both legs like other normal children of his age and play his favourite games like football.

However, in May this year as part of our outreach program in Mary Rice Centre we decided to include children from the mainstream school who had different forms of disabilities into our therapy sessions.

Through our networking we were able to get an above knee prosthesis for Nicholas from an organization called Jaipur for free. The prosthesis itself would have cost Ksh 150,000 which is unaffordable for Nicholas’s parents. We are currently training him on independent walking using the parallel bar, muscle strengthening activities and balance coordination. 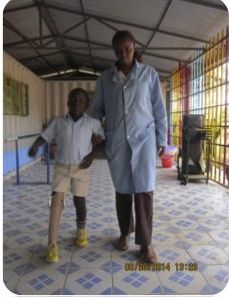 So far he is doing well and he is very positive about it and he is walking using one clutch as we look forward for him to be able to walk independently. It has also made his movement at home and school easier and he is also able to play better and enjoy his childhood just like any other child.